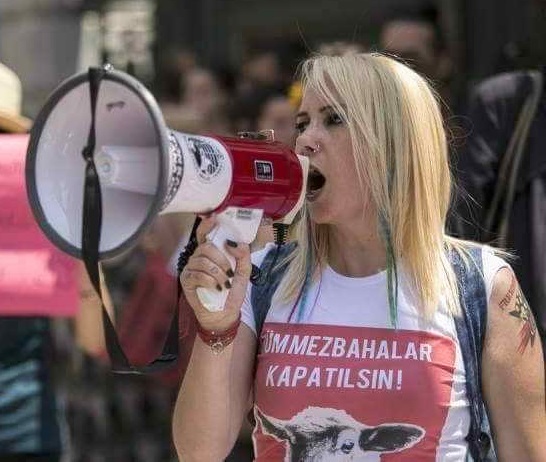 Yesim Nurova is a journalist affiliated with R9 Media. She is an animal rights activist known throughout Turkey and Europe. She has organized and led some of the largest animal liberation and animal rights demonstrations and protests, many with a Direct Action component, in Asia. Also, she is the Founder of the Spanish language A.L.F Frente de Liberación Animal Liberation/Animal Rights Community, an animal liberation and animal rights online resource for Spanish speaking activists around the world.

I live in Turkey.

Q-What organization(s) are you involved with?

Q-Why are you an activist? How did you get involved in the fight for
animal liberation?

I’m an Animal Liberation Activist because animals are the most oppressed beings on the planet. They suffer and endure so much pain at the hands of and service towards humanity. Worldwide there are factory farms, fur farms, leather factories, slaughterhouses, circuses and zoos. All of which imprison them and subject them to violence and exploit them for goods, resources and entertainment. They are slaughtered for food, clothing, accessories, cosmetics, medical testing and medical products. This is unacceptable in the twenty-first century. Animals have the right to live free of suffering and exploitation at the hands of humans. Fighting for the freedom of animals is my fight. I, and in fact all people, have an ethical responsibility towards animals. They cannot fight for their own freedom so the responsibility falls to Activists. They must be liberated from their slavery and I’m in solidarity with them. I’m fighting for their freedom.

Q-  What are the most pressing issues confronting animals in Turkey and
Europe? What animal liberation campaigns are you involved with?

One of the main issues regarding animals in Turkey is their exploitation and killing for religious purposes. But this, of course, is not just a problem in Turkey, it is an issue worldwide. And not just religious, animals are also killed around the world for cultural and political dogmas as well. This cruelty and violence knows no race, country, or religion. In the modern era there is absolutely no place for such barbarity. It must stop. The campaign for liberation is ongoing and has many facets.

Q– How did you get involved with your cause? Why do you think animal
liberation is important?

Since I was very young we’ve always had a lot of cats in our house, they were always treated as members of the family. And my friends had cats and dogs as well. When I was twelve my family took me to the zoo and  I was so full of joy. But I cried when I saw the dingy little cages where the animals lived. Stories had been told to me about how happy the animals were in the zoo but I soon realized that wasn’t true. When you see them out of their natural environment they have fear and despair in their eyes. At around age fifteen I began to participate in nature conservation activities and street protests, and I’ve been doing it ever since. Handing out leaflets, magazines, trying to raise awareness. There were several articles in local newspapers about the issue of animal rights because of this. The field of Animal Rights is like a combat zone when you run up against resistance. Animals are not property or food. I was a vegetarian for a very long time but soon realized that even there I was on the wrong side of justice. Vegetarianism is still a form of support of animal slavery. Over five years ago I became vegan. Veganism is the first step for individuals towards animal liberation.

Q– What are the most effective approaches and methods in the fight for
animal liberation?

We have come a long way but there is still a long way to go for Animal Liberation and Animal Rights. There are many different methods used in the struggle. Training, attending a variety of conferences, peaceful protests, petition signatures, etc., all of which I support. But these ways take time and the animals do not really have time to wait. State-supported institutions, scientists and companies have many resources. We cannot keep animals in cages awaiting death in many centers of domination waiting for their freedom. The Animal Liberation Front and Direct Action, sabotage, etc., is the most effective way to help animals. Peaceful means of trying to dominate a repressive system is not the most effective way of accomplishing our goals.

Q- – What was your most memorable experience as an activist? Why?

As I mentioned, when I was twelve years old my family took me to the zoo. Well, around the same time I remember some friends and I came across an area where some dogs were being held in cages. There were even some puppies inside. Many of them looked sick and like they were dying. They were looking at us as if to say “please get us out of here.” The area was completely fenced in but we came back at night and some of us jumped the fence. The dogs were handed up and out over the fence. I didn’t realize it at the time but I was taking part in Direct Action. Looking back, that was the moment that really turned me into an Activist.

Q– What is the relationship between your work as a journalist and your
work as an animal rights activist?

Animals and people are basically under occupation. Government, state-approved institutions and organizations, scientists, corporations and capitalism in general, see anyone who fights for not only animals but for the planet itself as terrorists. They try to organize all sorts of smear campaigns against Activists and Journalists as well. I’m an Activist Journalist, as I like to say. The two roles go hand in hand. We are in solidarity with other Activists and Journalists working against these exploiters. And we are all allied in the struggle for the freedom of all.

Q- – What is R9 Media? How did you get involved with it? What is its mission?

R9 Media is an alternative media organization which specializes in publishing what others don’t want published. That, after all, is the essence of journalism. I had heard of their work and was approached by a mutual acquaintance.

Q- -Why did you create A.L.F. Frente de Liberacion Animal Liberation / Animal Rights Community? What
is its mission?

There are many Spanish speaking Comrades around the world in the struggle for Animal Liberation and Animal Rights. And because solidarity is a powerful weapon, I created a centralized group where all could communicate together. The role of the A.L.F. Frente de Liberacion Animal Liberation / Animal Rights Community is to communicate to the world the actions taken by those Comrades in the struggle who put their lives and liberty at risk for the cause. And to also provide support for those imprisoned Comrades.

Q-What events or people influenced you, either positively or negatively?

What influences me the most is the misery and exploitation of animals. This causes my anger to grow and sorrow to spread in the struggle for Animal Liberation. Anger and love combined are an unstoppable fire.

Q– What advice would you give young people today who want to devote themselves to the fight for animal liberation?

If you really love animals remove them from the menu. Be vegan. Animal liberation is a fight. It is a real war between humans and animals. And don’t forget that humans are just another order of animal. No time to wait. Stop talking. The animals can’t wait, action must be taken. Fight, do not be afraid, even of the many risks. Animals deserve freedom. Help them…Now!

Previous: Scholar-Activist Spotlight with John Sorenson
Next: ICAS In Solidarity with Standing Rock