Fall of the Anthropocentric Paradigm?: Some Notes from the March Warsaw Conference 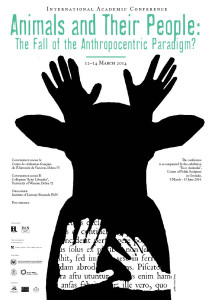 March 12-14 Warsaw saw an interesting animal studies conference titled Animals and Their People, and subtitled with a question: “The Fall of the Anthropocentric Paradigm?” The event was not without some publicity in Poland, on the radio and in the press, albeit the conference itself turned out to be rather small, with 80 participants attending (plus audience). Virtue doesn’t come with size, however, and the occasion attracted numerous interesting presenters from all around.

Although Animals and Their People was not explicitly “critical,” ICAS positions were defended and promoted, in varying degrees, by a host of scholars associated with the institute, including Helena Pedersen, Kim Socha, Vasile Stanescu, Carmen Dell’Aversano, Patrick McAleer, Kathrin Herrmann, and Kris Forkasiewicz.

The liberationist and abolitionist positions were not altogether unrepresented even beyond that group. If it’s any indicator, that might mean that they are getting closer to becoming default or at least popular positions among scholars and a matter of common sense in the broader academic field of animal studies. But this judgement might prove hasty. In any case, the organizers Anna Barcz and Dorota Łagodzka of Warsaw University are to be thanked for making sure that postulates of animal liberation in its many dimensions were not absent or lost in a crowd of standard half-hearted reformist or unengaged papers.

The discussions were provocative and heated at times, with equivocal scholars resistant to ethical engagement with their subjects–in short, meat eaters, for instance–being put under the wall on more than one occasion. While not particularly pleasant for some, this too attests to a possible coming shift of balance in attitudes among animal studies scholars. This sort of intellectual engagement in an academic contest is one of the reasons ICAS was started in the first place. 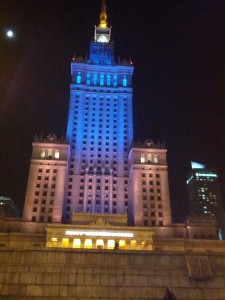 There seems to be some promise for further development of critical animal studies, alongside increased ICAS presence, in Poland. Even scholars seemingly new to more critical engagement with animal use, and probing the nooks and crannies of literary studies, for instance, seem to have a growing sense that something more is at stake than elitist intellectual fancy of academic life.

Thanks to the organizers for providing vegan catering to the participants which is likewise becoming a modsest norm at an increasing proportion of conferences. Some complain, but that’s to be expected.

The conference was accompanied by a trip to an art exhibition outside of Warsaw wonderfully entitled Ecce Animalia, devoted to animal subjectivity and individuality, and the relations between and among humans and other animals.

May animal studies flourish in this part of Europe and the world, becoming more radical, gaining more notoriety, and, above all, embedding itself securely in more mainstream discourse and injecting it with a desperately needed critical sense.