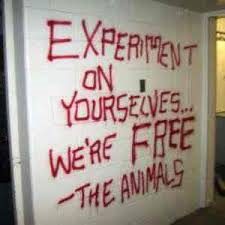 While all university “animal care and use programs” are the stuff of nightmares, the following five institutions deserve special mention based on:
• Animal Welfare Act (AWA) violations,
• numbers of animals killed,
• painfulness and invasiveness of experiments, and
• unwillingness to make improvements.
Please bear in mind when reading this post that rats, mice, birds, amphibians and other animals have been excluded from coverage by the Animal Welfare Act. This means — given that rats and mice alone are believed to comprise over 90% of the animals used in experiments — that the true depth of the depravity at U.S. universities with “animal care and use programs” is much greater.
So here, then — in no particular order — is a quick tour of the Top Five worst university “animal care and use programs”, U.S. edition:

(1) University of California, Davis
• UC-Davis is home to the California National Primate Research Center (CNPRC), which incarcerates approximately 5,000 primates. Dogs, cats, rabbits, and horses are also part of its animal experimentation program.
• While many institutions are phasing out animal tests, UC-Davis is expanding its primate facilities by constructing a level-3 biocontainment lab (i.e. a level indicating the use of among the most dangerous biological agents) to infect primates with deadly viruses.
• According to PETA, UC-Davis subjects more primates to painful and distressing experiments than any other U.S. university. For example, at the university’s CNPRC Inhalation Facility, primates breathe in pesticides, ozone, smoke, drugs, asbestos and other toxic inhalants. The facility has chambers specifically designed to force pregnant and infant monkeys to inhale tobacco smoke – despite the fact that human studies have already demonstrated the negative effects of smoking on pregnancy.

(2) University of California, San Francisco
• UCSF has a long history of AWA violations. For example, in 2005 it paid $92,500 in fines to the USDA for over 60 violations, including (1) performing surgery on a ewe and her fetus without anesthesia or pain relief, (2) leaving primates and lambs unmonitored after surgery, (3) forcing marmoset monkeys to breed continuously while nursing infants, predictably resulting in health problems and high mortality, and (4) performing craniotomies (i.e. surgical opening into the skull) without painkillers.
• In addition, there’s the following about UCSF’s treatment of mice, which, as noted, aren’t’ covered by the AWA: experimenters (1) chopped off the ends of mice’s tails without painkiller, (2) did toe amputations on mice older than 10 days of age, in violation of standard veterinary guidelines, (3) disposed of living newborn mice by throwing them into a cooler intended for dead animals, and (4) performed experimental surgeries on mice without giving them post-operative pain relief.
• Vivisector profile: Professor Michael Stryker’s “monocular deprivation” experiments on the brains of new born kittens by sewing their eyes shut so that their brains develop without visual stimulation. After varying periods of time, he reopens their eyes and cuts off the tops of their skulls. He then measures brain activity while the kittens are in front of television screens. According to the startling findings: “cats brains do not develop normally when their eyes are sewn shut.” These government-funded “deprivation studies” on cats have been going on since the 1970s.

(3) University of Florida
• 80% of the estimated 10 000 animals currently being warehoused inside UF are mice and rats. Of the others – primates, horses, dogs, and guinea pigs — the USDA reports that hundreds are being subjected to extreme pain, with many of them being allowed no pain relief whatsoever.
• Primates have been force fed arsenic-laced soil for over a decade. These experiments are conducted because the Florida Department of Environmental Protection is concerned about the arsenic-laced dirt in the children’s playgrounds that have been built in the state, and the monkeys inside UF serve as a tool to limit the state’s liability.
• Documents recently obtained by Eleventh Hour for Animals reveal that a monkey named Louis was found by UF’s vet to have a broken hip in 2009 and was allowed to live for a full year with no pain relief while they treated him for parasites that didn’t exist. He was incinerated a year later in 2010.
• Vivisector profile: Primates have been assigned to Professor Raymond Bergeron who specializes in poisoning monkeys with heavy metals to satisfy the estate of one of UF’s largest benefactors who died from an excess of iron in his blood. In 21 years, Dr. Bergeron has discovered nothing.

(4) University of Wisconsin, Madison
• UW-Madison is the former workplace of Professor Harry Harlow, he of the monstrous “monster mother” studies of the 1950’s, in which infant monkeys were removed from their mothers to be raised by mechanical “monster mothers”. In keeping with this hallowed history, UW-Madison is currently home to the Wisconsin Primate Research Center (WPRC), which keeps approximately 2,500 primates, including 500 primates confined to isolation cages. Every year, approximately 850 primates are subjected to experiments.
• It is here that Tasor experiments are conducted on pigs, in spite of the failures of countless other animal experiments to determine safety guidelines.
• For decades, vivisectors at UW-Madison have been conducting taxpayer-funded “sound localization” studies in which cats have steel coils implanted in their eyes, holes drilled into their skulls, and electrodes implanted in their brains. Sometimes, cats used in this experiment have had their ears cut off or are intentionally deafened by having a toxic chemical applied to their inner ear. The cats are then deprived of food for several days in order to coerce them to look in the direction of sounds during experimental sessions in which their heads are immobilized by a bolt screwed into their skulls. Shockingly, the U.S. government continues to support this irrelevant and deadly project and has provided UW with more than $3 million in grant money to abuse animals—even though researchers at other institutions around the world are already using updated methods with human volunteers to investigate how the brain locates and processes sound.
• Vivisector profile: In barbaric experiments conducted by Professor Ei Terasawa, drugs were injected directly into conscious primates’ brains using surgically implanted “cranial pedestals” in their skulls. Monkeys were immobilized in restraint chairs for three full days. One monkey died alone in his restraint chair while researchers were at lunch.

(5) Oregon Health & Science University, Portland
• OHSU is the home of the Oregon National Primate Research Center (ONPRC) which holds captive almost 4,000 primates who are used in over 900 in painful experiments, including tobacco, nicotine and pregnancy studies.
• Vivisector profiles:
o Professor Eliot Spindel — who has conducted nicotine studies on rhesus monkeys since 1978 — injects pregnant monkeys with nicotine and gives one group high doses of vitamin C (to prove that pregnant women can smoke if they take vitamin C). He then removes their fetuses by C-section and performs invasive “lung function” tests on babies, after which they are killed to conduct necropsies.
o Professor Miles Novy studies infection and preterm labor in pregnant rhesus monkeys. He implants catheters in both mothers and fetuses to record vitals and contractions. He then uses the catheters to inject various bacteria into the mother’s womb to induce infections. The monkeys are kept tethered in vests for months to protect the equipment while in excruciating pain from bladder and internal infections. In other experiments, infant monkeys are taken from their mothers to induce trauma so that researchers can study their neurotic behavior.
o In 2004, 248 sheep underwent painful procedures, which included “sexual orientation” studies. Professor Charles Rosselli studies the brains homosexual sheep in order to find hormonal mechanisms behind homosexual tendencies so that they can be changed.