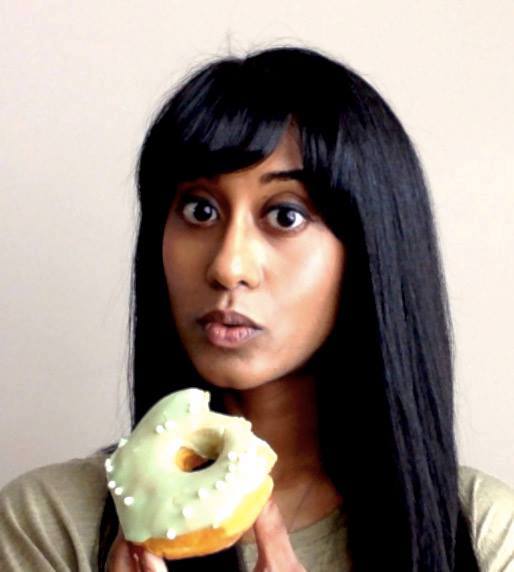 1. Please introduce yourself.  Hi, I’m Meneka (like “Monica”).  I am an artist, scholar, teacher, and activist living in Calgary, Alberta.  I am currently a doctoral student at the University of Calgary, studying Curriculum and Learning.  My research questions the neutrality of curricular structures by interrogating how educational spaces can be oppressive to humans, non-humans, and the earth.  I feel just as engaged in my teaching practice as I do in other areas; although I recognize the problematic nature of being involved in the educational-industrial complex by virtue of my career, I also believe that good scholarship, teaching, and learning can occur within the confines of this bureaucracy.  I’m very much interested in youth activism, humane education, and finding ways to challenge inequity in contemporary schooling.

2. What catalysed your activism?  I was fortunate to have attended an excellent elementary school, where critical, creative thinking was expected.  Although this school was not economically privileged, it was a place where some amazing teaching took place.  Because three grade levels would co-exist in one official “classroom,” the hierarchy of who could be the teacher was disrupted, and I learned equally from the adults and the other children.  My fourth grade teacher was a voracious reader; she read to us constantly and simultaneously encouraged us to seek out our own narratives to read.  I think it was through imagining myself as multiple different characters that I either discovered or developed a side of myself that was deeply empathetic.  When I read Charlotte’s Web, I realized that I could not possibly continue to eat non-human animals who had feelings and experiences that were exactly like my own.  When I was eight, I stopped eating animals.  For a very long time afterwards, my identity as an activist was fundamentally driven by the desire to convince others that non-human animals did not want to be eaten.  It seemed so simple to me, and I grew frustrated when I discovered that others did not see things as I did.  I became a vegan in university, which was around the same time that I began to learn about and become interested in more direct forms of activism.  I was a graduate student in Montreal at the time of the student protests, and I learned a lot about the steps to take prior to a protest, how to organize people effectively, and how to be persistent in resisting injustice.

3. What are some lessons you’ve learnt along the way? One of the most important lessons I’ve learned is that justice must be grounded in intersectionality.  Although I initially became interested in non-human animal justice issues, my experiences with racial and gender inequality seemed to naturally connect through the same violent, hierarchical roots.  Through many passionate discussions with my students, I’ve also learned to become more patient.  While the urgency and sheer enormity of these problems is often overwhelming, challenging perception with radical* ideas can take time.

*I do not believe that total liberation is all that radical; it seems like common sense to me.

4. Do you have strategies for avoiding compassion fatigue?  I do not feel qualified to answer this question! When I see or hear about something horrific, I get physically upset and it usually triggers my insomnia. I would like to get to a point where I can witness something profoundly disturbing and use it as motivation to continue my work, but I have a sensitive spirit and I’m not sure when (or if) that will happen for me.  One thing that I do find helpful is surrounding myself with other activists and situating myself in a strong community.  I’m lucky that despite living in a city that happily embraces the sobriquet “cowtown,” there are a number of wonderful activists who inspire and support me.

5. What are you currently involved in/current projects?  At the moment I am working on organizing an anti-fur leafleting event at my university.  More broadly I am collaborating with the other SCAS (Students for Critical Animal Studies) members to determine how to engage new scholars in SCAS events, as well as disseminate information on SCAS.  I’m also trying to find ways to incorporate discussions about CAS into the classes I teach in high school, and of course there’s the PhD I should probably be working on as well.