In the Dark: The kangaroo cull in Canberra, Australia 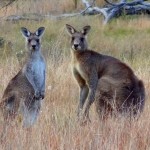 I tried to stop myself falling asleep over the keyboard. It was 2pm in the afternoon. Classes had finished and I was planning the night ahead; groaning to myself about the coming late night and having barely two hours sleep before I would have to come into work to teach again. I checked the online local news and the headlines jumped out at me ‘Kangaroo cull finished early’. I pinched myself. I couldn’t believe it. To everyone’s surprise the kangaroo culling season finished early this year in Canberra, Australia. It was intended to finish at the end of July but suddenly, it was over. The government had set out to kill 2500 kangaroos. This so-called conservation cull is relatively new in Canberra, only starting in 2010. The government argue the kangaroos pose a threat to native grasslands and other small animals that live on the nature reserves which they share with the kangaroo. The government scientists completely ignore the fact that kangaroos have lived on this continent for millions of years and their biology actually helps preserve and encourage native grasses to grow.  We argue the kangaroos do not have to be killed. They do not overpopulate and they do not destroy the grasslands, instead preserving them. 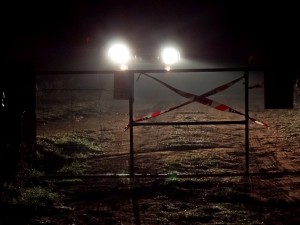 Activists fought back, going out nightly till 4 and 5 in the morning to try and find the shooters and bring the killing to a halt. Then packed up, catching a couple of hours sleep before going off to work. The final number of deaths was 1700 kangaroos. For a small band of dedicated activists this was a win, a sad win, but nonetheless a win. It was testament to their sheer determination to, in below zero temperatures, in the middle of the night, sneak on to the reserves and throw a light on the killing. Once people were on the reserves the shooters would stop shooting. We let them know we were there by shining our torches over the land and into the night sky. This was the sole aim of the activists. The license to kill issued to the government shooters forced them to stop if people were on the reserves. And, if we were lucky, we might find the shooters themselves. Of course none of this was easy. Activists were under constant surveillance and knew if they were caught on the nature reserves faced anywhere between $1500 and $7500 in fines. Three activists were caught on a reserve and each fined $1500. One activist was arrested for merely blowing a whistle outside a reserve as he strove to let the shooters know they were being watched and the killing witnessed. 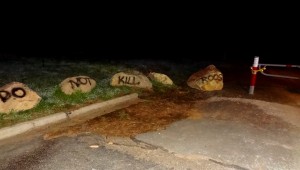 On another night I was bailed up by the police and rangers while standing outside a reserve. I had heard shooting but was under such continued close surveillance I could not go on the reserve (as I had one on two previous occasions) without being caught. Later at around 2am while I had been screaming down the megaphone and finding an easier breech on to the reserve the police turned up. The shooting stopped then. Two hours later the police threatened me with arrest if I did not desist from the noise I was making and shining the torch in the direction of the shooters, arguing it was impeding the shooters’ work. I was stunned. I could only protest in silence. They left at 3:30 in the morning. I went home not long after. Taking away the right to protest (which the police effectively did that night) came on the back of other severe restrictions under the newly revised Conservation Act. If you sat outside a reserve, rangers could demand your name and address and if you refused could fine you on the spot. If they thought you ‘might’ commit an offense they could demand your name and address and fine you if you refused. Rangers now had more police powers, something they didn’t have before. 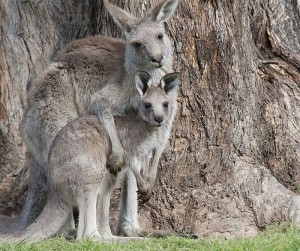 Midway of the killing season we held a protest for the public to attend. This was to highlight the hundreds of what is known as at-foot joeys who die as a result of the cull. Their mothers are shot and then these young ones (who no longer live in their mother’s pouch) die later on from exposure to the elements through lack of nourishment. At this stage they are still very reliant on their mothers for milk whilst their little bodies develop enough to live off local grasses and plants. These joeys were represented as ‘ghosts’ in the dark. 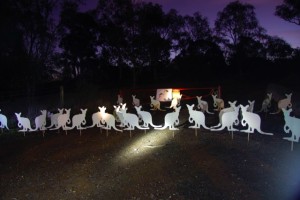 Whilst we sit in our the warmth of homes we plan ahead for next year. It will come quickly. The killing season will be nearly half a year long next year. But this year we showed the government that we would not back down. We would resist and fight back.  And, we will take a stand once again. 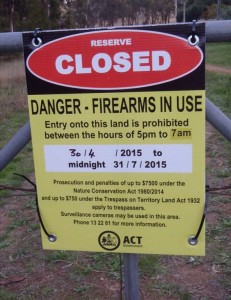