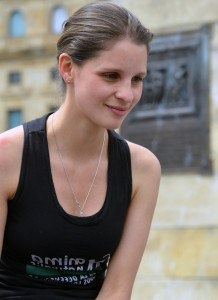 I am Colombian. I am 36 years old and I am a political and academic activist for animal rights.

What catalyzed your activism?
I decided to become an animal rights activist as I was motivated by feelings and convictions of justice and compassion. Like many people, I started working for the protection of cats and dogs. With time, I began to find out about the industries and practices where animals are victims of systematic oppression, exploitation and extermination. At 23 I made the decision to devote my life to the defense of animals, without giving up on academic life. I achieved two master’s degrees (in criminology and political science), which increased my capacity for understanding and action. My womanhood in a country of patriarchal tradition has been a favorable factor to my activism. The daily contact with rescued cats that I foster in my house has nurtured my sensitivity for other forms of sentience and ways to exist.

What are some lessons you’ve learned along the way?
I have learned the importance of keeping my political independence so that the actions of denunciation, mobilization and proposals that we generate don’t lose their legitimacy in the face of decision-makers, the public opinion and the media. Also, the importance of developing an integrated political, legal and social activism, that makes academics a constant interlocutor. A relevant lesson of political activism has been the importance of creating opportunities for participation, aiming to build collective proposals with people and provide legitimacy to advocacy processes. Also, the lesson of hearing and recognizing the different ways of working for animals from people’s everyday experiences. Building good relationships with the media based on clear, timely and reliable information has been one of the most important lessons of this process.

Do you have strategies for avoiding compassion fatigue?
The most effective way that I have found to cope with compassion fatigue is by working. Being in constant activity, writing proposals, managing projects and participating in processes, has been fundamental to avoid falling into despair (though inevitably there are plenty of moments of anger and suffering). Academic work has been my most important ally to produce, debate, argue and, somehow, to transform negative feelings into capacity for action. Cats have been, and remain being, my most tender teachers in the emotional path.

What are you currently involved in/current projects?
I have led and participated in public policy, regulatory and advocacy processes for the protection and defense of animals in Colombia. Currently, I am the spokesperson for AnimaNaturalis International in Colombia and a doctoral student in law at the Andes University in Bogotá. My doctoral research is a systematization of arguments in favor of the political, legal and moral recognition of animals. I write a weekly column for the Publimetro Colombia newspaper and I coordinate the CES (trap, neuter, return) team for the humanitarian control of feral and homeless cat population in Bogotá. Finally, I’m part of ICAS Latin America, the existence of which shows that the social movement for animal rights is growing and becoming aware of its role as a collective political actor. This will be an exciting project!