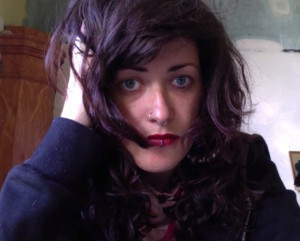 My name is Jess. I live on Wurundjeri land in Naarm (or so called Melbourne, Australia), with my nonhuman and human best friends. I’m currently doing a PhD and tutoring alongside activism and being the representative for ICAS in the Oceania region. I really love high heels and hope to see the end of capitalism. I can be found ranting about prison abolition or fermentation most evenings.

What catalysed your activism?
I was a bit of an outsider as a kid. I didn’t have many friends and for a while I was embroiled in some cultish Christianity. At some point the feminist literature I was reading could no longer sit well with the messages I was learning on a Sunday so I left the church. Well it was that, and the growing realization that the love I felt for my best girlfriends was more than friendly. As I joined feminist and queer organizations, I started to see the extent to which our world is messed up. Later, I was working with a feminist group and volunteering at a homeless drop in service whilst doing my masters degree. My partner at the time was really into animal rights, but I just thought being vegetarian was enough. I’d gone vegetarian at a pretty young age, mostly because a girl I knew was vego and I was completely obsessed with her. She also opened my world to Riot Grrrl music, for which I am eternally grateful.
Anyway, I’d started thinking more deeply about nonhumans, and had adopted a beautiful cat who alongside nibbling my toes when she wanted her breakfast, also stole my heart. Slowly things started to come together and I was considering going vegan. One night I went to a pub with some friends from uni, and people were racing crabs. Yep, that’s right, racing crabs. I was so disgusted that I became vegan on the spot.
Somehow this led me to attending an ICAS conference in Buffalo, New York. That conference finally brought together all my queer, animal and feminist theories and ideas. And the rest, as they say, is her/their/history.

What are some of the lessons you’ve learned along the way?
This is hard to answer. Once you realize how badly nonhumans are treated, you can never be the same. Even harder is the realization that you are one of the oppressors.
If I were to speak practically, I’d have to say that I have learned some pretty interesting lessons. For example, always carry baby wipes, because in high stress situations your bowels turn to jelly and you’ll soon have to shit in a bush. I also have a large body of knowledge pertaining to the regulations for owning, carrying and using a gun, due to countless weekends of stopping duck shooters (hence the need for baby wipes). And, I’ve learned the value of being nice to people you loathe, because often they are the ones with said guns.
I’ve also learned some pretty sad things, about the extent of animal cruelty and my feelings of never having done enough.
Those who have taught me the most are of course the animals I’ve met along the way. I could think of a thousand anecdotes, but the most important would be that whilst you always feel like you need to do more, never forget to appreciate those animals around you because that’s why you do it in the first place.

Do you have strategies for avoiding compassion fatigue?
Some days this is really impossible. After coming home from hunt sabotage or spending the day in the library reading about animal exploitation, all you can do is be overwhelmed with nihilism. Those days call for chocolate or pasta with stacks of nutritional yeast. Never underestimate a vegan’s need for comfort food.
On other days I just hang out with my nonhuman friends and think to myself, at least we have helped them. Watching my dog friend Gretchen running in to the river is enough to pull me out usually. And if not, she’ll just keep jumping all over me until I pull myself up again and take her for a walk.

What projects are you currently involved in?
As I mentioned, I spend weekends trying to stop duck shooters, this is with the Coalition Against Duck Shooting (http://www.duck.org.au/ ). This basically means standing in wetlands during the early morning trying to stop birds flying near shooters, or trudging through the water looking for wounded birds.
I am also the Representative for ICAS in Oceania. Currently we have a conference in the works in Melbourne, Australia: “Conflict & Struggle, Resistance & Change” being held in Melbourne, 9-12 July (https://www.criticalanimalstudies.org/2014/11/icas-oceania-2015-conference/).
I also am the chair of the Gender and Sexuality Intersectional Research Collaborative. We’re just getting on our feet but have a special issue of the Green Theory and Praxis Journal coming out shortly.
In my spare time I try to fit in my PhD, in the hopes of challenging the queer and transphobia that works its way in to animal studies and activism.
My most important activism is the caring and nurturing I do for the nonhumans and humans in my life. You see, it is hard to get up and freeze your legs off to sabotage hunters, but it’s even harder to do the everyday caring and nurturing. That is something we need to value and uphold more.