In the wake of the grand jury’s failure to indict Darren Wilson there has been protests around the nation standing in solidarity not just with Michael Brown but with all the victims and survivors of police brutality. This brutality is not color blind. Nor is it proof of a few bad apples. This brutality is part of an ongoing legacy of racism and settler colonialism that has plagued the United States since its inception. Now is not the time to be decrying protesters taking to the streets. Nor is it the time to ask what reforms could pacify the populace. Rather, now is the time to affirm without question that #BlackLivesMatter. Now is the time to stop asking for justice and to demand it.

One thing that Ferguson made clear, which was already apparent to most people of color in America, is that civil society will not grant protections to those people who exist on the margins. Even the most basic concepts such as the right to life, liberty, and happiness can be denied on a whim to blacks, latin@s, natives, LGBTGIA, and disabled populations. The fact that it is Darren Wilson who can ‘legitimately’ claim he “feared for his life” is a sign of hypocrisy given the everyday reality for people of color who have to live with the fear of stop and frisk policies, deportation, and police brutality. What Ferguson has made obvious is that the police are not here to protect us. The police are here to repress us. What has also become clear in the wake of Ferguson and the rampant militarization of police is that we the people will no longer sit idly by and take it.

When even Russia is denouncing the endemic racism and discrimination in the United States as a threat to democracy something has gone disastrously wrong. Of course, this is not to champion Russia’s record on civil rights. Rather it is to demonstrate the international gravity Ferguson holds. The world is watching and whether America continues to go about this holiday weekend with its traditionally consumeristic allure or does something radically different can set the stage for a revolutionary consciousness.

We at ICAS North America stand by all forms of resistance that people are expressing and denounce those who are criticizing the protesters instead of the white supremacy that has built up its institutions of power. Until we challenge that authority, instead of each other, can we change the system. The situation in Ferguson is not unique. It is happening all over the country all the time and most of it goes unreported. However, when the spark is finally lit and the world pays attention we must be ready to respond to show that #BlackLivesMatter.

As a result, ICAS North America strongly encourages everyone to join in to #BoycottBlackFriday. This means more than just boycotting shopping the day after Thanksgiving. Instead it means withdrawing our consent throughout the holiday season to a system of neoliberalism that has propped up racialized violence. Whether it be the sweatshops fueling the deals at Walmart, or the people being gunned down in the street, if we continue simply shopping instead of withdrawing our consent things won’t get better. It is time to stop being the docile bodies the United States Federal Government wants us to be and start being the multitude that we are. Together we can rally together and take a stab at the corporate enterprises the funds the foundation of racialized violence. A nation-wide boycott of Black Friday, Cyber Monday, and whatever other corporate holidays get named can help send a signal that until there is truly justice there can be no society. Racism is a problem for everyone not just people of color. No one should profit while our children are being killed in the street by the very people supposedly meant to protect them. Join us in boycotting Black Friday and sending the signal that we will be idle no more. 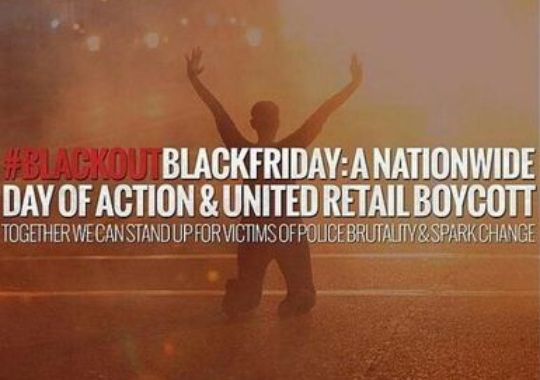