“The Rise of Critical Animal Studies: From the Margins to the Centre” Edited by Nik Taylor and Richard Twine 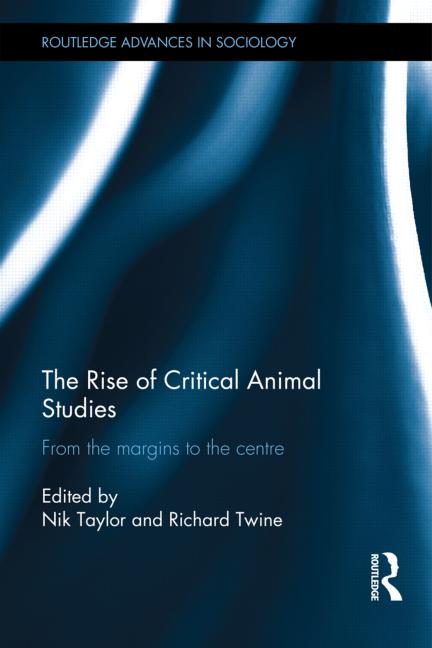 As the scholarly and interdisciplinary study of human/animal relations becomes crucial to the urgent questions of our time, notably in relation to environmental crisis, this collection explores the inner tensions within the relatively new and broad field of animal studies. This provides a platform for the latest critical thinking on the condition and experience of animals. The volume is structured around four sections:

The Rise of Critical Animal Studies demonstrates the centrality of the contribution of critical animal studies to vitally important contemporary debates and considers future directions for the field. This edited collection will be useful for students and scholars of sociology, gender studies, psychology, geography, and social work.

1. Beyond Speciesism: Intersectionality, Critical Sociology and the Human Domination of Other Animals by Erika Cudworth

2. From Centre to Margins and Back Again: Critical Animal Studies and the Reflexive Human Self by Kay Peggs

3. Vegans on the Verge of a Nervous Breakdown by Sarah Salih

4. Listening to Voices: On the Pleasures and Problems of Studying Human-Animal Relationships by Lynda Birke

5. Studying Perpetrators of Socially-Sanctioned Violence against Animals through the I / eye of the CAS Scholar by Jess Gröling

7. Labourers or Lab Tools? Rethinking the Role of Lab Animals in Clinical Trials by Jonathan Clark

8. The Cultural Hegemony of Meat and the Animal Industrial Complex by Amy Fitzgerald and Nik Taylor

9. Mapping Non-human Resistance in the Age of Biocapital by Agnieszka Kowalczyk

10. ‘The Greatest Cause on Earth’: The Historical Formation of Veganism as an Ethical Practice by Matthew Cole

11. On the Limits of Food Autonomy: Rethinking Choice and Privacy by Stephanie Jenkins and Richard Twine

12. The Radical Debate: A Straw Man in the Movement? by Carol S. Glasser.