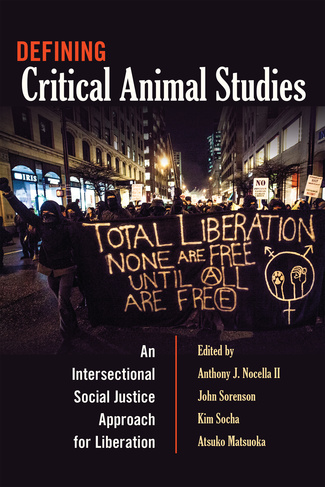 This is the first book to define the philosophical and practical parameters of critical animal studies (CAS). This book gives the history of CAS, ICAS, and is edited  by and with contributors from ICAS all over the world.
Rooted in anarchist perspectives that oppose all systems of domination and authoritarianism, CAS both challenges anthropocentrism and presents animal liberation as a social justice movement that intersects with other movements for positive change. Written by a collection of internationally respected scholar-activists, each chapter expands upon the theory and practice underlying the total liberation approach, the roles of academics and activists, and the ten principles of CAS. With apolitical animal studies and exploitative animal research dominating higher education, this book offers a timely counter-narrative that demands the liberation of all oppressed beings and the environment. Defining Critical Animal Studies will interest educators, students, activists, community members, and policy makers seeking accessible theory that can be put into action.Facebook Fan Page: https://www.facebook.com/pages/Defining-Critical-Animal-Studies/346505362118620
Buy it at amazon.com
___________________________________________________________
Defining Critical Animal Studies: An Intersectional Social Justice Approach for LiberationPublisher: Peter Lang Publishing, 2014Edited by: Anthony J. Nocella II, John Sorenson, Kim Socha, and Atsuko MatsuokaBook Series: Shirley Steinberg, Counterpoints: Studies in the Postmodern Theory of Education

CHAPTER ONE:
An Introduction to Anthropocentrism, Humanism, and Contemporary Animal Ethics
Adam Weitzenfeld and Melanie Joy

CHAPTER FIVE:
The Ivory Trap: Bridging the Gap Between Activism and the Academy
Carol Glasser and Arpan Roy

PART V: TAKING IT TO THE STREETS

CHAPTER NINE:
From the Classroom to the Slaughterhouse: Animal Liberation By Any Means Necessary
Jennifer Grubbs and Michael Loadenthal

CHAPTER TEN:
Taking it to the Streets: Challenging Systems of Domination From Below
Richard White and Erika Cudworth

AFTERWORD:
From Animal Oppression to Animal Liberation: A Historical Reflection and the Growth of Critical Animal Studies
Karen Davis

WHAT PEOPLE ARE SAYING ABOUT CRITICAL ANIMAL STUDIES READER:

“Defining Critical Animal Studies is the type of book that everyone should read, not just animal rights activists, but also the naysayers, fence-sitters, and uninformed. And why? Because this book is educational, enlightening, and transformative. It literally alters how we see and understand the issues of human and nonhuman relations, equality, democracy, food, consumption, activism, and social movements. And the book accomplishes this task by practicing what it preaches: bringing together a variety of scholars and activists, both old and new, that address the theoretical, practical, political, and personal intersections of animal liberation.”

“Through their work in this excellent volume, the editor and contributors give me hope that perhaps all is not lost for our species. But then I think, what kind of society marginalizes, harasses, and surveils these kinds of people as terrorists, but valorizes and rewards the real radicals and the real terrorists whose blood-lust for profits has normalized the systematic torture, oppression, and genocide of creatures unfortunate enough not to have been born human? As long as the latter group retains the backing of state violence, they’ll continue super-sizing us toward extinction.”

“Defining Critical Animal Studies comes at a moment when the devastating effects of climate change, the loss of species in the current 6th mass extinction, the overconsumption of the earth’s resources, endless toxic wars, and the exponential increase in human population are converging far more quickly than scientists predicted to create a multitude of crises – not in the distant future – but right here and now. This book reveals the necessity of reframing social justice and animal rights thought to forge new visions and creative movements to end human and corporate domination and exploitation of other humans, other forms of life, and the Earth.”

“This is a must read for anyone concerned with the interconnectedness of struggles for justice and liberation. It is against single-issue politics. It is for the rights of all animals, irrespective of species, age, sex, race, class and ability. What an exciting book!”

As radical means “root,” Defining Critical Animal Studies is a radical book that explores the social, historical, and political roots underlying the oppression and exploitation of human and nonhuman animals alike. The book is also radical in advocating for the connection between scholarship and activism, and in promoting interdisciplinary and intersectional approaches to “the question of the animal.” Students, scholars, activists, and citizens interested in engaging social justice across the species boundary will find these essays confronting many of the key issues of the twenty-first century, where what is at stake is survival itself.

“Critical Animal Studies is a spreading academic discipline that brings much-needed activist and radical perspectives to classrooms globally, just the kind of thing that breathes life and real substance into higher education.”

“There is an urgent need for a broader analysis in the animal liberation movement. The contributors to Defining Critical Animal Studies grapple with questions our movement will have to engage in in order to move forward.”

“Finally, a collection of work that details the rapidly growing field of Critical Animal Studies. Scholars and activists will find much-needed intersectional analysis that calls for nonhuman animal liberation, dismantlement of human oppression and the end of environmental exploitation. Defining Critical Animal Studies should not be read by anyone who wishes to continue the status quo.”